Trying to set up MQTT gateway and two temp/humidity sensors. I can get to the gateway setup page, but the settings don’t persist when I save them. The gateway goes back to setup mode (flashing blue) after I save and the settings I entered are gone when I reconnect to the gateway. I chose Network, entered password, id’ed the IP of the MQTT g/w, left port at 1883. MQTT endpoint requires no authentication so I left client id, username, and pswd blank in that section. On advanced tab, I selected DHCP On, and that setting persisted, but the gateway never appears in my network. Devices list is empty, though both temp/hum devices are set to on.

I have also tried hard resetting

I believe the settings are saved, but do not show back up when you enter the configuration webpage. When setting up mine, I had to enter the information every time while getting my settings correct. I set mine up with a static IP. The IP settings can be a little tricky if you aren’t familiar with those settings. One our IT guys helped me with mine. Also try setting up a user for your MQTT gateway just to see if it will work. I wrote a tutorial on setting up a MQTT gateway with Ignition SCADA, but it has a lot of generic info that could help you.

I finished the tutorial on how to use NCD’s enterprise sensors with Ignition SCADA software via MQTT. I’ve also posted this on the Ignition forum as well. Enjoy! MQTT_SensorTutorial_V2.pdf (3.4 MB) @tbackus EDIT: Fixed a couple of typos I missed in the pdf first go around.

What does success look like on the MQTT Gateway when everything works? Solid green light?

Mine is going to blinking blue every time. Any idea what that means (other than the obvious that it’s in setup mode again)?

As far as I know, it only means setup mode. Not sure of any other meaning for that.

What web browser are you using? If you’re using a Microsoft browser try Google Chrome, Firefox, or Safari. There are known issues with Microsoft Edge and Internet Explorer.

Does your WiFi network appear in the network drop down box?

I have made some progress, though not sure how. I now have the gateway on my network, but the status light is solid red for a while then blinks off for a while, then solid red again. I’m not sure what that means. The image attached from the doc doesn’t seem to help. 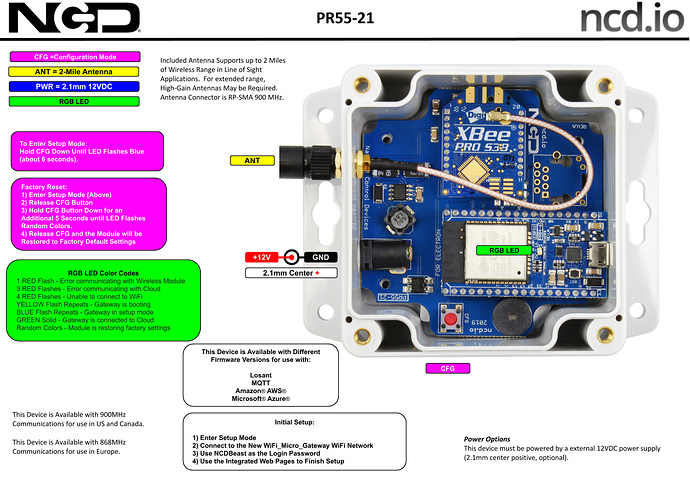 It sounds like the gateway is not able to connect to your WiFi Network. Make sure it is a 2.4ghz network and not a 5ghz wifi network. Also check that the password entered is correct.

Is this a large corporate network or a small home router managed network? By default the Gateway will be in DHCP mode so it will obtain an IP from the DHCP on the router it connects to. The IP it is assigned would be unique to your network infrastructure.

Interesting… I changed the password on my network to only have letters and numbers (no special characters). Now I have a solid green light. My old wifi password had &, %, and * in it.

Ah. Good catch. I honestly had not tried special characters in the password or SSID field before(only numbers, letters, and common characters such as - and _ ). I’ll look into this and see if it’s something handling could be added for.

I hope everything else goes smoothly for you. Let us know if you have any other questions.

So I know this is an old thread, but I had similar problems and it turns out it was special characters in my MQTT password (not my WiFi password). At least, after creating a new MQTT user with a password containing only letters and numbers I was able to get to the “green light” stage… although still not seeing any data published to my MQTT broker. One thing at a time…

If there ARE restrictions on the allowable characters in the passwords… or on length… it would be good to document them somewhere.

Anyway, to be clear I have it working now, but only after (a) setting up a new MQTT user without special characters in the password (b) configuring the device to use a static IP. I’m testing this at home, BTW, using a Linksys “mesh” router.