I work for a university and am trying to install the email generator to monitor the burglar alarm at the President’s house. I am having issues with the initial configuration. I am not confident it is getting a connection but was hoping there was some way for me (someone without admin access to the network) to see if it’s pulling an IP.

Our wifi network is set up as a captive portal where the user needs to accept the AUP and register the device before it gets dropped on the network. I have worked with our networking team to manually create a MAC reservation so this device could bypass that process.

I plan on taking it home to verify that it is working with the g-suite account we set up but the more info I can gather on my own before calling the network team the better.

I second your suggestion to take it home and verify it’s functionality there. If it works there then you know the issue is with authenticating with the WiFi Network.

The saga continues. I was able to work with the network team and convinced them to spin up a separate SSID just for this device. Everything was working flawlessly. I had customized the email bodies for each input and configured the recipient list. After testing each one I was asked to add a recipient that was forgotten. I pressed the mode switch, waited for the blue flashing, connected to the network, but the page wouldn’t load. I glanced over at the device and the LED was on solid and was a purple color, like red and blue at the same time. I unplugged the power for 30 seconds and plugged it back in, now it just sits there with the purple LED. Multiple reboots and presses of the mode switch have done nothing. It appears to be bricked. Is there some kind of factory reset that can be done on these?

You can attempt a factory reset.

Let me know if this works.

No such luck. It is completely unresponsive to any input on the CFG button. As soon as I apply power both the red and blue LEDs turn on constant and stay that way no matter what I do.

Is there any way we can just reflash the software on it?

Yes, you can flash the firmware over the USB connection on the device.

How to update Micro Gateway Firmware

Let me know if you have any questions on this.

Well, after spending an embarrassingly long time trying to track down a microUSB cable that actually had the data pins wired up, I got it to show up in device manager. However, the script appears to be timing out. 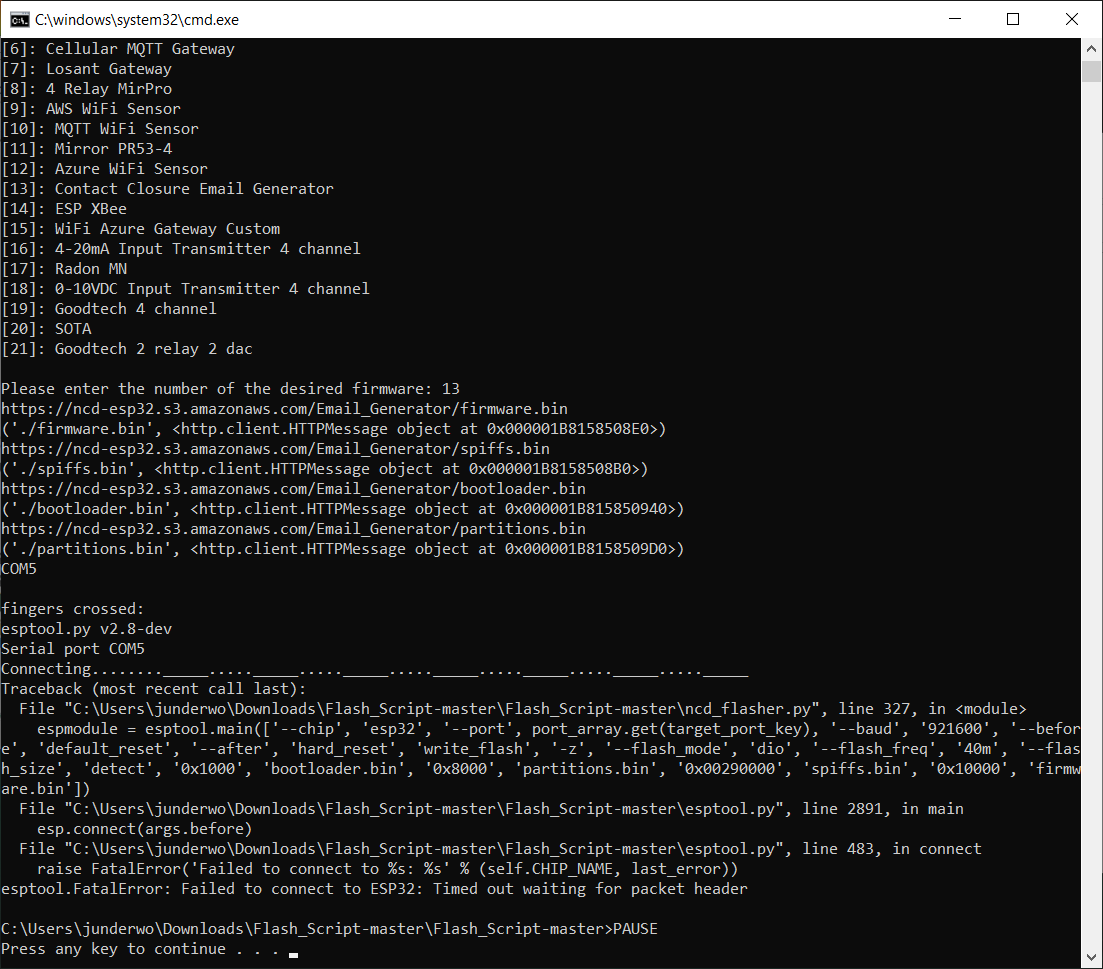 I apologize for the delayed response.

Not all USB hardware drivers are able to automatically put the module into PGM mode. This is what is happening when you see the terminal print …_…. It is trying to put the module into Flash/PGM mode. Looks like the USB port on this computer is not able to use the DTR/RTS lines to control the mode. It’s an easy fix however.

Let me know if you have any questions on this.

Firmware on update server is ready to refresh your device. Let me know what you find.

I was able to successfully reflash it but when I remove power to reinstall it in the enclosure it reverts back to the solid purple LED. It has done it three times in a row now. The location it is installed at loses power somewhat frequently, and the power on email function was one of the primary selling points for us, but it obviously doesn’t do me any good if it needs to be flashed every time it reboots. Can we send it in for repair or swap it out for another one?

If you did configure settings can you provide screen shots of the configuration settings you loaded into it? If you just flashed and this happened let me know.

I tried it both ways. The first time I configured the wifi, email, and input settings. The following two times I powered it down as soon as the script was finished, immediately slid it back into the enclosure and powered it back up.

A solid purple LED is normal after boot up for approximately 6 seconds or so. However eventually the LED should start flashing Blue after a fresh update.

It has been sitting at a purple LED since the last time I rebooted it. About 40 minutes now. It functions normally after a fresh update but obviously I have to unplug it in order to get it back into the enclosure. Once it is powered down and back up again it, it hangs on the purple LED.

I can flash it again and it will work fine, until it loses power. Then I’m back at square one.

I just used the same python script here to flash an ESP32 module and everything worked as it should. I guess the only difference is I do not have the ESP32 module installed in a board. It’s just sitting by itself and is powered by the USB cable(unplug module from board). Could you try that? After flashing just disconnect/reconnect the USB cable to see if it does the same thing.

Also please confirm you are selecting firmware option 13 during the flashing process.