I’ve purchased a few of the IoT 3-Ch Wireless current sensors (https://store.ncd.io/product/3-channel-industrial-iot-wireless-ac-current-monitor-sensor/) with the IoT edge computer for some experimental development and wanted ask a few questions on functionality. The documentation seems to indicate that the current change detection function will result in a packet being sent for every event cycle. Is there any way to suspend this functionality and have it send packets only periodically, with a running count? I’m trying to get cycle counts on various AC powered devices and I only really care about the total number of cycles in a day, or per half day. I wouldn’t even care if the count was lost on power down - only that it keeps an increasing count value since boot indicative of the number of cycles detected on a channel, and that count value is sent out only once per interval (with the interval being programmable).

I’d like the battery to last as long as possible, so having it send a packet on every event cycle will reduce my battery life. Is something like this possible with existing hardware? Or perhaps, is there alternate firmware for the device I already have that accomplishes this task?

If anyone has any thoughts, or if there is an alternate product in your lineup that fits this use case better, I’d love to know.

I’m not 100% certain I understand what you are asking. Are you saying that you want to set a report interval for the sensor where it would wake up every X seconds, send telemetry and then go back to sleep? Essentially you do not want the device to transmit on current detection change, only on interval?

Hi,
by default the device sends data after the fix interval. the change detection feature has to be enabled by users.
So if you dont enable it it will send after a fix interval

I’m looking to detect AC events, where the events are reported as a running count on a periodic basis.

Basically, you’d clamp the sensor onto a line as normal, lets say a garage door motor. On powering up the sensor for the first time, it sends a broadcast packet with a count of zero (for each channel) immediately. Every time the sensor detects the door’s activation given a threshold, it will increment an internal count variable by one. On some periodic interval, say an hour (programmable), this running count would be reported with the normal data report broadcast packet. So, every hour in this example, I would expect a packet with a count indicating the number of cycles the door has experienced. The count should not reset between transmissions, and instead increase continuously. If a single packet is lost, or not heard, you can detect this from the frame count header variable, but you’d loose data. Having a running count means even if you loose individual packets, the next packet can always be used to determine the number of counts not known about in the previous report.

I’m looking to do cycle counting generically on AC powered devices for predictive maintenance, and something that can give me a running count would be helpful. I assume this isn’t possible given the current firmware on the sensors I have, but is there an alternate version of this board or alternate product that can support my use case?

the closest match we have is this one 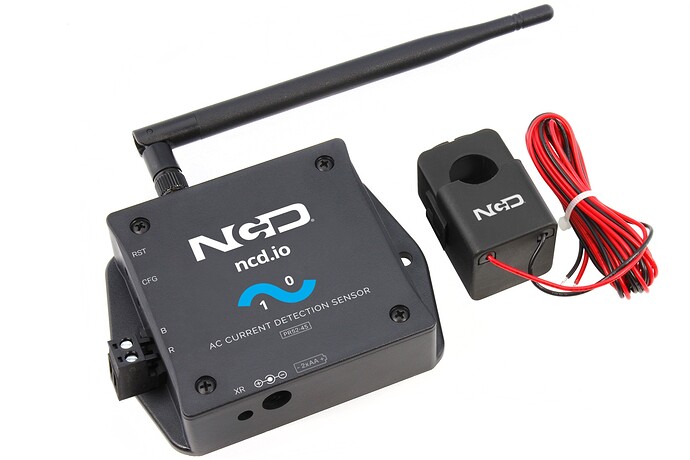